The event set in the Kremlin Palace Hotel had 11 countries and a very large Turkish contingent with over 175 participants.

Tom took Gold in the cadet kata and 2nd in the -65kg contact event. After a gruelling 3 round semi final he was very tired and was put under pressure in the final with his opponent gaining a waza ari. Tom came back really well and was taking the fight to his opponent but was unable to recover the point.

Olivia had the misfortune of having her bag lost by the airline so had to borrow a gi and all protection but still fought really well and won her semi final by 3 round decision and lost the final also by 3 round decision to also gain 2nd place. For both the cadets it was invaluable experience.

Middleweight Blake, took 2nd in the adult kata losing on count back after a tie for 1st place. Stepping into his first adult international equate himself very well and had a gruelling quarter final picking up an injury around the knee. This was too affect him in the semi where his opponent kicked him across the knee and although an illegal technique the GB coach Felix Ntumazah rightly advised the judging panel Blake could not continue but it wasn’t due to the knee kick but previous damage.

Alan Shnawa also took 3rd place losing out on a 3 round decision in the lightweight category. 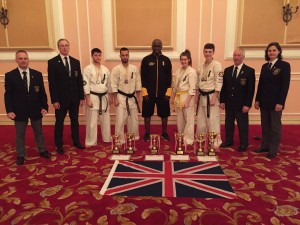 Well done to all the Juniors who took part in the squad run by Sensei Tony White assisted by Sensei Wai Cheung. 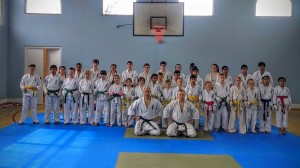