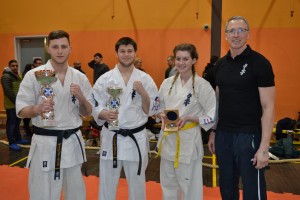 The club had three participants in the Scottish Open at the Arc Gym, Glasgow on Saturday and they all produced top displays.

First up was cadet fighter Oliva Pickthall, who had one match against Aiofe O’Grady-Cocoran of Ireland. Olivia controlled the match catching Aiofe early with a head kick and then worked her opponent round the mat with strong punch and low kick combinations for 5-0 victory.

Both Dawid Ozga and Blake Collins were in the open mens middleweight.  Blake was in the top half of the draw in his first open adult event. He won his first bout with an ippon with two jodan mawashi’s to the head stunning his opponent. Then he lost a decision to the more experienced Luke Baldwin (Wales) in a very good fight.  In the 3rd place fight off he controlled the bout dropping his opponent for ippon with a strong body punch.

Dawid who normally campaigns at LW, earned a quick decision against his dutch opponent and then winded both his next two fighters with body punches for waza ari.

In the final against Luke he started very sharply and after about a minute scored waza ari for a punch to the body and took the decision at the end of the round.

Three of our students will complete in the Pilatus Cup an event in Switzerland for under 18 on 19th March 2916.

Tom Bradley 17, will fight contact rules in this international event and Bart Chaisrisud 14 and Kobe Spinney Dibble 12 will compete in the light contact and kata event.

Well done to all 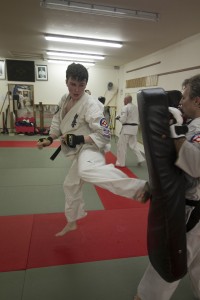 The new site is live but still under construction. Please feel free to browse the site, some tabs are incomplete at this time