Senpai Gary Hawkins after 15 years as a Shodan was successful in his Nidan (2nd Dan) grading along with two of the clubs young competitors Senpai’s Blake Collins and Dawid Ozga.

Also taking his Shodan (1st Dan) was Tom Frith whose journey has been a long one. After starting karate in 1977 he had a long lay off from the mid nineties after reaching his brown belt. Returning in 2012 it is a special moment for him to finally take the rank of black belt Senpai. 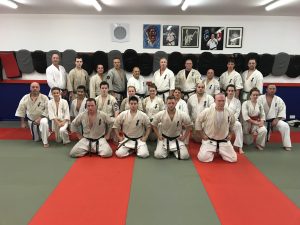